Water vapor is one of the many gases that makes up the air we breathe. A little water vapor is good; too much is trouble.

An important term to understand moisture issues in a home is Relative Humidity (RH). Relative humidity is a measure of how much water vapor is in the air compared to how much it could hold at a given temperature. 100% RH means the air can’t hold any more water vapor at its current temperature.The goal, for energy efficiency in a home, should be to maintain an indoor RH in the 40% to 60% range, for comfort and health benefits (including deterring the growth of mold). For optimal dust mite control, RH should be below 50%. 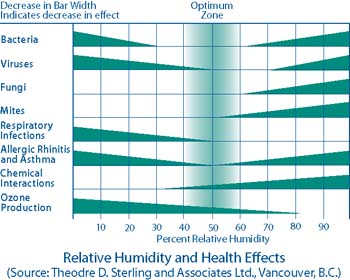 Warm air can hold more water vapor than cold air. When warm, humid air is cooled, it can’t hold as much water vapor (RH rises), so the excess condenses into liquid water. That’s why cold surfaces “sweat.” Dew point is the temperature that will cause condensation or when the RH is 100%. The solution to condensation (sweating surfaces) is to reduce the relative humidity of the air (which lowers the dew point temperature) or keep surfaces warmer (above dew point).

Much of the energy used in air conditioning is to remove moisture from the air. Activities of an average household add about 3 gallons of water per day to indoor air (as water vapor).

Water vapor can move through walls, ceilings, and floors (the building envelope) of a home in following two ways:

Manage Cookie Consent
To provide the best experiences, we use technologies like cookies to store and/or access device information. Consenting to these technologies will allow us to process data such as browsing behavior or unique IDs on this site. Not consenting or withdrawing consent, may adversely affect certain features and functions.
Manage options Manage services Manage vendors Read more about these purposes
View preferences
{title} {title} {title}