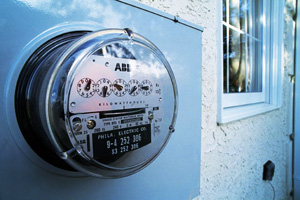 Photo of a home electric meter

Electricity is uniquely unforgiving—even the smallest mistake can cause fire, injury, or death. This article is an introduction to your home’s electrical system, but is by no means inclusive. Contact a licensed electrical contractor for more information about your home’s specific electrical system and what changes, if any, should be made.

An amp, short for ampere, measures the amount of electricity moving through a wire. Amps give electricity its “shock.”

A volt is the “pressure” that pushes electricity through wires. This is how electricity gets from the power plant to your house.

The amount of power a device consumes is termed watts, or wattage. Wattage in most cases is determined by multiplying the amperage by the voltage. Electrical use is measured in kilowatt-hours (kWh)—wattage multiplied by time, divided by 1000.

Electrical current is carried in wire from the point of generation to the point of use. Wire is sized according to the amperage it is designed to carry; codes specify the maximum current carrying capacity that is safe for wires of different diameters.

1. When the price of copper soared in the early 1960s, manufacturers responded by making residential electrical wires out of aluminum. Between 1962 and 1972, nearly 2 million homes were wired with aluminum, and many of these have not been upgraded. Consult a licensed electrical contractor if your home was built during this time period, or if you think you have aluminum wiring, as corrosion can lead to fire hazards.

2. Receptacles (also known as outlets) supply power to electrical equipment used in houses. Up until the mid-1960s, ungrounded receptacles were installed in most homes, but grounded receptacles are now the rule. Grounding ensures that if a short circuit occurs, electrical current flows through the ground system and trips a breaker or blows a fuse. A grounded outlet has three holes for each plug; the rounded slot is the ground connection. Make sure all receptacles in your home have 3 holes, if not get them changed to a 3 hole one.

3. Look at your home’s service panel—a fuse box or circuit panel, usually located in a metal box. This panel serves two functions—as a master switch for turning off all of the power in the house, and to direct utility-supplied electrical power into branch circuits to safely distribute power throughout the house. Each fuse or switch controls the electricity flowing through a specific area of the home and serves to cut off the power when a circuit is overloaded. Without adequate protection, overloaded wires heat up, which can lead to a fire. It is a good idea to “map” your service panel. That is, label each fuse or switch with the room or area it serves.

The National Electrical Code (NEC) lists the specific fuse/breaker size and the wire gauge that it is meant to protect.

When a fuse blows or a breaker trips, it means there is something wrong. The problem could be from outside of your home (e.g. a power surge during a lightning storm), or it could be from inside (e.g. too many devices used in a single circuit; incorrectly installed wiring; appliances drawing more current than the circuit is rated for, etc.). Mapping the service panel helps to quickly zero down the problem area in a home and take corrective action.

4. Ground Fault Circuit Interrupters (GFCI) : Whereas standard circuit breakers and fuses are meant to protect the wiring of a house, the GFCI is meant to protect life. A GFCI can be an electrical receptacle, a circuit breaker, or a portable device. It works by monitoring the current going to the load and comparing it with the returning current. If even tiniest leakage in currents is detected, the GFCI acts quickly to shut off the circuit. This can prevent serious injury or death. The NFPA 70A requires GFCIs to be used in certain locations. Make sure your home complies with this for your and your family’s safety.

Beginning July 28, 2006, U.S. manufacturers produced new versions of GFCIs that indicate either by visual or audible means, or by stopping the flow of electricity, that the device needs to be replaced. Distributors can sell, and electrical contractors can install, old GFCIs until their supplies run out.

5. Arc Fault Circuit Interrupter (AFCI): An AFCI is a newer device that detects electrical arcing. Arc faults occur when electrical products or wires are damaged, aged, or improperly used (e.g. an extension cord that is repeatedly pinched by a door closing, or a wire punctured by a nail). The NFPA 70A requires certain rooms to be protected by AFCIs.  AFCIs “sense” the particular signature of an arc—where electricity has to jump a gap—and act immediately to shut off the circuit, preventing a fire hazard. These arcs can occur along circuits in residential electrical systems, and at outlets and switches behind walls. Such hidden electrical fires can spread rapidly undetected by smoke alarms, thus reducing the chances of survival.

Caution: Note that some electrical systems do not work correctly with certain receptacles, GFCIs, AFCIs, etc. Always consult with a licensed electrical contractor in this regard. 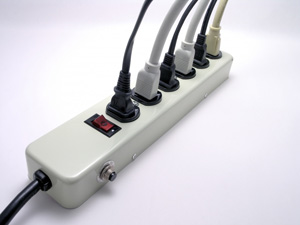 Photo of power strip. Do not overload circuits.

Many home electrical fires are caused by faulty wiring or overloaded circuits. Eectrocutions get caused by improper or careless use of appliances. Here are a few suggestions to minimize these kind of risks: