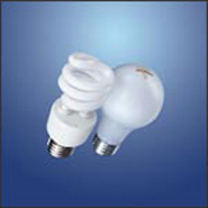 How much can I save by switching to Compact Fluorescent Lamps/Light bulbs?

On an average lighting represents 10-15% of a home’s electricity bill. Switching from incandescent light bulbs to compact fluorescent lamps/lightbulbs (CFLs) is the simplest way to save on this bill.

A CFL bulb uses only 1/4th of the energy used in a incandescent bulb and last 10 times longer. It does cost about $2 or more in comparison to incandescent bulbs however, if bought at a regular retail store. If bought in bulk from ware house clubs (Costco, Sam’s ), which are present all over the U.S., depending upon the wattage, these can be as low as 50 cents a piece. Thus, one can easily save the initial cost of the bulb several times over its entire life time.

On an average, each CFL bulb can save more than $30 in electricity costs over its lifetime, and prevent more than 450 pounds of greenhouse gas emissions in the atmosphere.For the biggest energy savings, replace incandescents or halogens with CFLs in the rooms you spend the most time in, such as the family room, living room, and kitchen. It is estimated that if every household in the U.S. changed just one incandescent light bulb with an ENERGY STAR qualified CFL, the nation would save enough energy annually to light more than 2.5 million homes, and prevent greenhouse gases equivalent to the emissions of nearly 800,000 cars.

CFL lamps and bulbs that have earned the ENERGY STAR label combine quality and attractive design with high levels of energy efficiency for homes. All qualified fixtures:

How do “regular” light bulbs work?

Incandescent bulbs, or “regular” bulbs, consist of finely coiled wire filaments in a glass bulb filled with an inert gas. The wire’s resistance to the flow of electricity causes it to become hot enough to glow. About 90% of the energy used by an incandescent bulb becomes heat and only 10% becomes light.

How do fluorescent lights work?

Why do fluorescent bulbs use less energy?

More of the energy of a fluorescent bulb is converted into light and less into heat. By producing less heat (about 75% less heat for an ENERGY STAR qualified CFL), fluorescent bulbs also save on air conditioning costs. You save twice!

What is a ballast?

A ballast is the part of a fluorescent bulb that excites the phosphor molecules. Depending on the bulb, it can either be attached, as it would be in CFLs, or it can be part of the fixture, as it would be with fluorescent tubes. Ballasts can be magnetic or electronic, and often last much longer than the bulbs themselves. Electronic “instant start” ballasts are often used for the 4-ft overhead fluorescent lighting fixtures frequently found in garages, shops, kitchens, and bathrooms. For other uses, however, the instant start feature may be detrimental, because the bulb usually doesn’t last as long. If you’re interested in longer bulb life, look for CFLs that don’t mention “instant-start” on the package.

How do I know how much light I’ll get, when the wattage on two CFL bulbs is different?

Look at lumens; lumens measure light output, whereas watts measure energy use. For example, one 100-watt incandescent bulb on the market provides 1710 lumens and uses 100 watts of energy. Its efficiency (or efficacy) is 17 lumens per watt (LPW), calculated by dividing 1710 by 100. A CFL that provides similar light output, an average of 1750 lumens, uses 28 watts. Therefore, its efficiency is around 63 LPW (1750 divided by 28). The higher the LPW, the more light you receive for the energy used. Federal law, since 1995, requires both lumens and wattage be printed on bulb packages. The package may also include the equivalent or a comparison to incandescent bulb wattage.

Is it true that fluorescent lighting is harsher than incandescent?

What is the Color Rendering Index (CRI)?

CRI measures the perceived color of objects under artificial light. It is measured on a scale from 0-100. The higher the number, the more natural and vibrant an object will appear. Incandescent bulbs usually have 95+ values. Old-style fluorescents had values of 62 at best, which is why people complained in the past that fluorescents gave false colors. A CFL with a CRI of 80 or above is acceptable for everyday residential use; many fluorescent bulbs meet this requirement.

What is Color Correlated Temperature (CCT)?

What should I look for when shopping for CFL bulbs?

Compare brands for price, lumens, wattage, hours of life, CRI, and CCT. CRI will be a 2-digit number and CCT will be a 4-digit number; sometimes the CCT will be incorporated into the product number with the last two zeroes dropped off. Check the CFL’s packaging for any restrictions on use (e.g. some should not be used in enclosed fixtures). Many are made for specific fixtures such as recessed cans, dimmer switches, or outdoor fixtures. Look for the ENERGY STAR logo. It can be a daunting task for some. EPA has developed an interactive Buyers Guide that can provide guidance and help you choose correct CFL for a fixture in your home.

Should I turn off the fluorescent lights when I leave the room?

Can I use dimmers with fluorescent lights?

Yes—provided you pick fluorescent bulbs that are dimmable. Manufacturers are beginning to produce dimmable fluorescents that will work in standard incandescent fixtures. Read package directions carefully—if incorrect bulbs are installed, it can cause fires.

CFLs contain very small amounts (approximately 4-5 milligrams) of mercury sealed within the glass tubing. Mercury is what enables the CFL to be an efficient light source. Currently, there is no substitute for it, but manufacturers have been trying to reduce the amount used. No mercury is released when the bulbs are in use, and they pose no danger if used properly; however, care should be taken when handling, because the tubing is glass.

Why do some CFLs burn out earlier than advertised?

Some people have reported that the CFLs in their homes do not last as long as advertised. If a CFL burns out earlier than it should, it may be a faulty bulb, excessive heat build-up in the fixture (especially in enclosed fixtures), lack of good contact of the bulb base to the fixture, or excessive vibration such as in an overhead fan or near a door. Some experts suspect it could also be fluctuations in voltage or faulty wiring.

If you experience problems, be sure you are using the correct type of CFL. The approved uses are generally on the package. Read the fine print. Check that you are using the correct bulb for the type of fixture, the temperature, and conditions of use. For example, a bulb not rated for exterior use may perform poorly. Some bulbs are meant to be used in only downward facing fixtures. Other bulbs are for use in enclosed and recessed, three-way, and/or outdoor fixtures, or for use with a dimmer, timer, or photoelectric eye. Write the date of purchase on the container, or carefully on the bulb base itself. Keep receipts. If it burns out early, take it back to the retailer and/or contact the manufacturer.

How do I dispose of CFLs?

Don’t throw CFLs away with the household trash if there are better disposal options. Check the Recycling Locator at earth911.org, which comes up with available disposal site options by zip code search, call the U.S. Environmental Recycling Hotline at 1-877-327-8491, or contact your local waste management agency for guidelines in your community. Additional information is available at lamprecycle.org.

If no other disposal options are available except the trash can, place used CFLs in a plastic bag and seal it. Never send a CFL or other mercury-containing product to an incinerator. If burning household trash is still legal in your rural area, do not burn CFLs, because mercury would be released.

What should I do if I break a fluorescent light bulb?

The EPA document has information on how to clean up a broken fluorescent bulb: http://www2.epa.gov/cfl/cleaning-broken-cfl

Manage Cookie Consent
To provide the best experiences, we use technologies like cookies to store and/or access device information. Consenting to these technologies will allow us to process data such as browsing behavior or unique IDs on this site. Not consenting or withdrawing consent, may adversely affect certain features and functions.
Manage options Manage services Manage vendors Read more about these purposes
View preferences
{title} {title} {title}